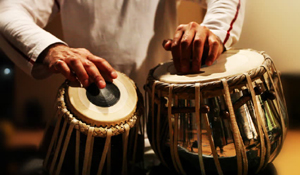 The tabla is the most commonly played drum set in North Indian music. It is the instrument most frequently used to accompany vocal and instrumental music, and dance; whereas its primary function is to maintain the metric cycle in which the compositions are set.

Though the tabla is essentially an accompanying instrument, the tabla players are also soloists in their own right, and many have vast repertoires of elaborate compositions handed down orally from generation to generation.