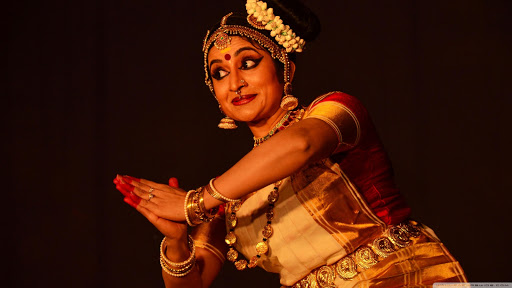 Mohiniyattam, also spelled Mohiniattam, is one of the eight classical dances of India that developed and remain popular in the state of Kerala. The other classical dance form from Kerala is Kathakali. Mohiniyattam dance gets its name from the word Mohini – a mythical enchantress avatar of the Hindu god Vishnu, who helps the good prevail over evil by deploying her feminine powers. Mohiniyattam's roots, like all classical Indian dances, are in the Natya Shastra – the ancient Hindu Sanskrit text on performance arts. However, it follows the Lasya style described in Natya Shastra, that is a dance which is delicate, eros-filled and feminine. It is traditionally a solo dance performed by women after extensive training. The repertoire of Mohiniyattam includes music in the Carnatic style, singing and acting a play through the dance, where the recitation may be either by a separate vocalist or the dancer herself. The song is typically in Malayalam-Sanskrit hybrid called Manipravalam. The earliest mention of the word is found in the 16th-century legal text Vyavaharamala, but the likely roots of the dance are older. The dance was systematized in the 18th century, was ridiculed as a Devadasi prostitution system during the colonial British Raj, banned by a series of laws from 1931 through 1938, a ban that was protested and partially repealed in 1940. The socio-political conflict ultimately led to renewed interest, revival and reconstruction of Mohiniyattam by the people of Kerala, particularly the poet Vallathol Narayana Menon.