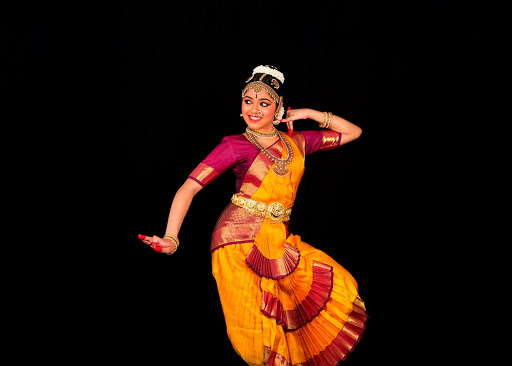 Bharatanatyam is the most widely known within India and abroad. It is the classical dance style native to southern India, particularly the state of Tamil Nadu. Like other Indian classical forms, it exhibits two main components:nritta, or pure dance technique, featuring rhythmic footwork patterns and beautiful abstract movements of the body, and abhinaya, or expressional dance, featuring a vocabulary of hand gestures and facial expressions used to mime the words of the song. The pure dance technique of Bharatanatyam is marked by symmetrical lines of the body, exuberant leaps and bends contrasting with subtle neck and eye movements, and crisp, intricate footwork. The lyrical content of the songs used for the expressional dance of Bharatanatyam is primarily devotional or mythological. Its purpose is not merely to entertain but to inspire, uplift, transform, and ultimately to carry both the dancer and viewer closer to knowledge of the Divine.

In the 20th century, Bharatanatyam emerged from the temple to take its place as one of India's premier theater art forms.